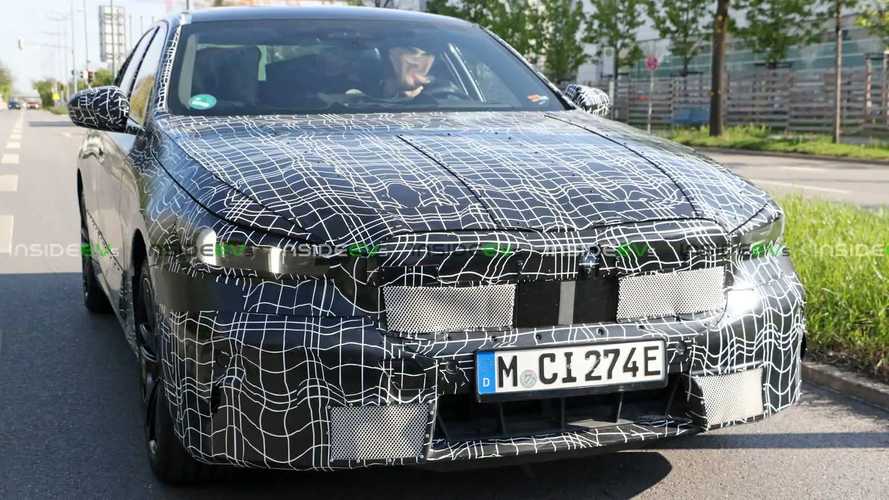 BMW will launch an all-electric version of the next-generation 5 Series, which is expected to be called i5 and debut in 2023 for the 2024 model year. Available in both sedan and touring (wagon) guise, the new model was recently spotted by our spies who not only shot its camouflaged exterior, but they also got a peek inside for the first time ever.

This particular prototype appears to be more advanced than older ones we’ve seen since it has what appear to be its production headlight clusters. It looks like all those renderings that previewed what the new 5 Series’ front fascia and headlights would look like got it just right – these headlights’ shape reminds us of the old E60 5 Series…

We’re also pleased to see the new 5 Series will not get an oversized front grille, which in the case of the electric i5 variant would be completely covered up, anyway. It all looks really restrained and conventional from all angles, including from the side where the vehicle looks more like a traditional three-box sedan than a more recent fastback-style vehicle.

In the back, the light clusters still appear to be placeholders, and if you were not convinced this prototype was completely electric, then the stickers on the front doors and on the rear bumper will leave you in no doubt.

Regarding the interior, while our spies did manage to get a few shots of it, most of the panels are actually covered. We can see the steering wheel, which in this case looks a lot like the one in the BMW iX, although its rim is rounded with a flat bottom, rather than hexagonal like it is in the SUV; it’s the same wheel recently unveiled with the 7 Series / i7.

The center screen, the one used for infotainment, looks really large on this prototype, visibly bigger than the digital gauge cluster. It looks a lot like what we saw on the brand new i7, although we can’t quite make out if the screens in this i5 are curved or not – they don’t look like they are, but it could just be because of the angle the photos were shot from.

Expect the new 5 Series and i5 interior to look a lot like the new i7, although it won’t be quite as flashy or opulent. One shift that BMW announced with its new flagship sedan is that it’s moving away from animal products and focusing more on materials that come from renewable sources – expect to see more fabrics, as opposed to (fake or real) leather in all new BMWs.