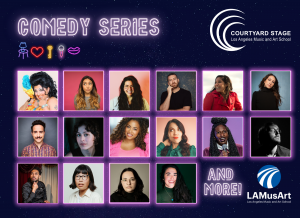 The Comedy Series in the Courtyard will feature a robust slate of comedy engagements including stand up, improv, sketch, drag and live podcasting.

LOS ANGELES, CA, US, May 5, 2022 /EINPresswire.com/ — Los Angeles Music and Art School (LAMusArt) announces its new summer series of live comedy performances, Comedy in the Courtyard, along with the grand opening of its first ever on-campus stage, the Courtyard Theatre. The Comedy Series in the Courtyard will feature a robust slate of comedy engagements including stand up, improv, sketch, drag and live podcasting.

Throughout the summer months, June-September, LAMusArt will host over twenty comedy events for the East LA community. Stand up comedy shows will occur nearly every Thursday evening, featuring local LA comics from all backgrounds. Weekend events will include a sprawling roster of 21 and older experiences.

The comedy series is announced in tandem with the grand opening of the organization’s new outdoor stage, custom built to suit the facility’s courtyard. With challenges brought on by COVID-19, LAMusArt found a fitting solution in building their own stage on campus.

“We’re thrilled to bring local artists into this new space, and to offer the community of East LA entertainment in their own backyard. This is a community that has been hit hard by the pandemic, and we’re so excited to bring people, new and returning, through our doors for some much needed joy,” says Executive Director, Manuel Prieto.

Tickets to all Comedy Series shows are now available via Humanitix.com. For more information, please visit www.LAMusArt.org/comedy or call LAMusArt at 323-262-7734.

About the Los Angeles Music and Art School
The Los Angeles Music and Art School is a 501 (c)(3) non profit arts organization whose mission is to provide East LA with equitable access to quality arts education programs. Established in 1945, LAMusArt is the only multidisciplinary destination for high-quality arts instruction located in the community. The organization aims to offer accessible and affordable arts education to young, at-risk students regardless of their gender, ethnicity, aptitude, or socio-economic status, year-round. # # #