Plane that can be flown remotely – BBC News

Volvo Cars and Starbucks have announced that the first ChargePoint EV chargers have been installed at a Starbucks Store in Provo, Utah.

As part of a joint project announced in March 2022, Volvo and Starbucks aim to install as many as 60 DC fast chargers at up to 15 Starbucks stores along the 1,350-mile (2,172-kilometer) route linking Seattle, Washington to Denver, Colorado—and Starbucks’ headquarters in Seattle to the Colorado Front Range.

This pilot plan will help electrify a major thoroughfare from the Pacific Northwest to the Rocky Mountains, opening electric vehicle travel between four critical markets including Seattle, Boise, Salt Lake City and Denver.

Previously under-resourced to support EV charging, this scenic artery passes near six national forests and some of the country’s most iconic spots. From the Snoqualmie Pass in Washington, stretching the Snake River in Idaho, spanning Arches National Park in Utah and connecting outdoor destinations like Park City and Vail, the route represents the American road trip at its best.

The first four chargers have already been installed at a Starbucks location in Provo, Utah (East Bay – University & 9th, 979 S University Ave.) and are scheduled to become active later this month.

The next Starbucks store to get ChargePoint chargers as part of the pilot project is in Grand Junction, Colorado. By the end of the year, Volvo and Starbucks plan to have chargers at Starbucks stores roughly ever 100 miles (161 kilometers) along the route, which is well within the range of nearly every EV.

“Partnerships like this are hugely important as we continue to move towards a more sustainable, electrified future. Together with Starbucks and ChargePoint, we are creating an EV charging network that can fit seamlessly into everyday life. It’s a great compliment to Volvo Cars’ mission to give people the freedom to move in safe, sustainable and personal ways, and we look forward to the many ways we can make a positive impact together.”

Interestingly, while drivers of any EV equipped with a standard CCS1 or CHAdeMO receptacle will be able to use these stations for a fee, Volvo EV drivers will have access to these stations at no charge or at preferential rates. ChargePoint’s DC fast chargers can bring the Volvo C40 Recharge from a 20 percent to a 90 percent charge in about 40 minutes.

To find and access the ChargePoint charging stations at participating Starbucks locations, drivers of Volvo Recharge models with Google embedded can use the ChargePoint app integrated into their vehicle’s in-dash system, while others can us the ChargePoint smartphone app.

Here’s the full list of communities that will have EV chargers at Starbucks store locations along the route. 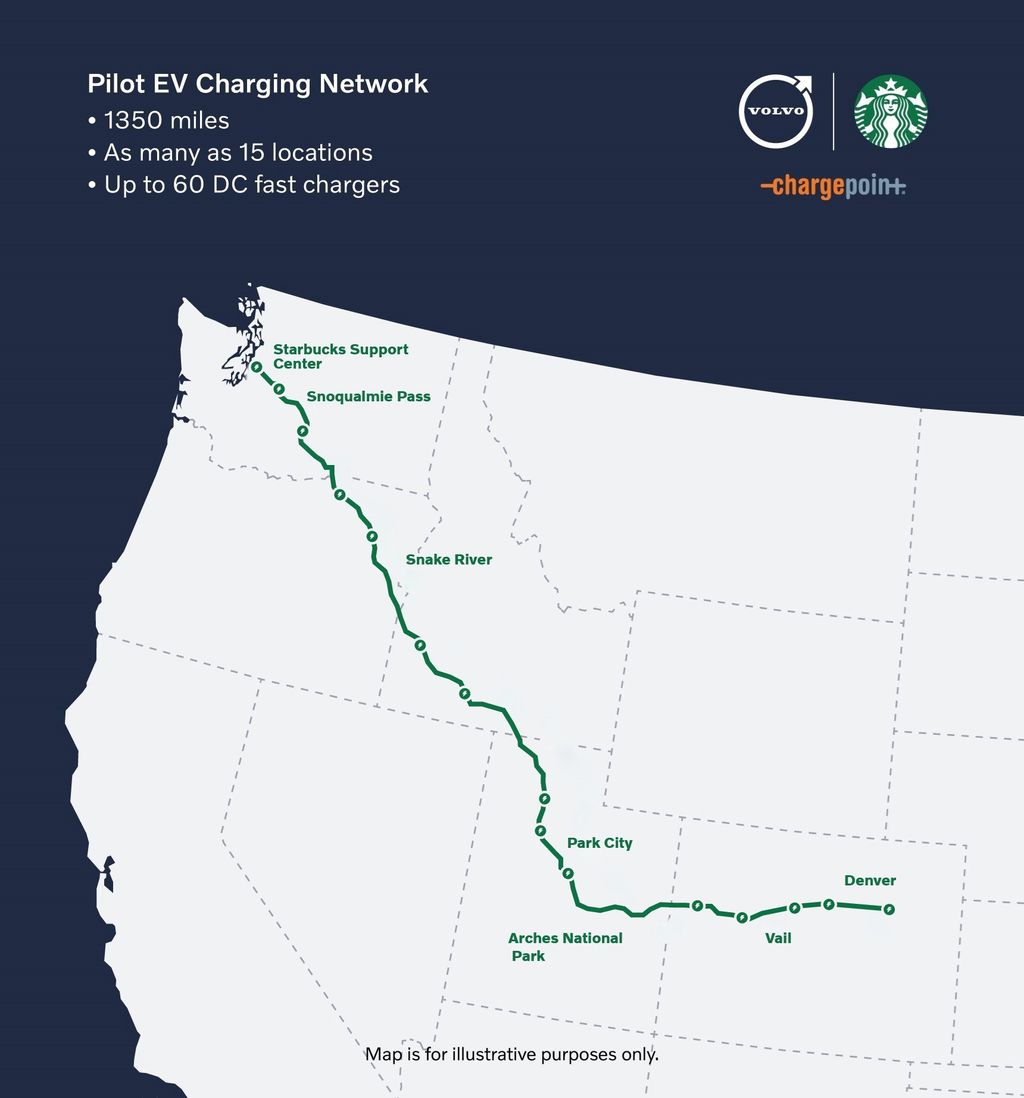