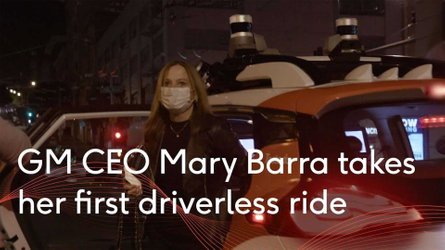 Cruise Co-Founder, Interim-CEO, and CTO Kyle Vogt treats General Motors‘ CEO Mary Barra to her very first ride in a truly driverless car. You gotta love the opening message in the YouTube video above, “Last week our friends from Detroit took a midnight ride straight over the moon.”

While everyone knows autonomous cars can’t head to space … yet, Barra certainly felt as though she was over the moon during her first ride. The ride itself didn’t happen in Detroit, but rather, San Francisco. Not only did Barra get to see with her own eyes that cars are already truly capable of driving themselves, at least under the right conditions, but she also got a seemingly relaxing tour of the celebrated Bay Area.

The video opens with Barra and Vogt waiting for a fully autonomous Chevrolet Bolt EV named “Tostada” to pick them up. The car literally arrives with no one in it. The two jump into the back seats and they’re off. Barra says it’s incredible, which comes as no surprise. She says she always believed this was possible, but to actually experience it is “surreal.”

We’ve watched Tesla‘s growing fleet of Full Self-Driving Beta testers blown away in many instances as well, and FSD Beta can’t yet drive itself without a driver’s attention and assistance. If people are fascinated by Tesla’s progress, we can’t imagine how they might feel after riding in a driverless Bolt.

We’d love to know what you think. Do GM and Cruise have what it takes to be true leaders in autonomy? Let’s start a conversation in the comment section below.