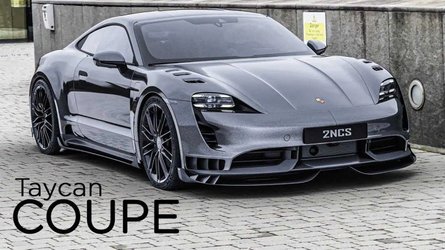 Not one automaker currently sells a two-door all-electric coupe. Yes, not a single one. Eventually Rolls-Royce will launch the Spectre, meanwhile the Piëch GT may or may not launch at some stage in the mid-2020s. But in terms of mass-produced, somewhat attainable electric coupes nothing is on the way as it stands – which is pretty sad.

The likes of Honda and Genesis have teased concepts of electric coupes, but the chances of either reaching showrooms as production cars is slim to none. Simply put, crossovers and SUVs are usually a far more profitable route for automakers.

That hasn’t stopped artists like 2NCS from dreaming however. Taking a regular Porsche Taycan Turbo S as his base car, he rendered it into a seriously beautiful 2-door coupe. Adding a number of extra touches for a more menacing look, the Taycan Coupe sits low and has a seriously aggressive stance. It even has scissor doors too, because why not I guess – this is CGI after all.

But back to reality for a second – imagine if Porsche really did this? They already have the J1 chassis and the vast majority of the required parts. A Taycan coupe – starting at around $90,000 in RWD guise, would surely offer appeal as a weekend car to a whole new customer base who wouldn’t have previously considered a 4-door Taycan – or maybe even an electric car at all.

What are your thoughts on 2NCS‘s Taycan Coupe? Let us know in the comments below.