Out of that, the company sold 114,877 all-electric vehicles (passenger and commercial), which is about 3.4% less than a year ago.

Renault sales numbers are preliminary, on the manufacturer level.

Let’s get into details, starting with December. The total BEV volume for the month, according to the manufacturer’s preliminary data, amounted to 17,866 (down 17% year-over-year).

Nonetheless, it was an amazing December – the second-best month ever – below only December 2020, which was artificially inflated by a variety of factors in Europe, including the “CO2 emission rush” to lower average fleet emission.

All-electric cars accounted for 12.3% of the total Renault passenger car sales globally (22.9% in Europe) and 5.6% of commercial vehicles (7.2% in Europe). Because Renault BEVs are sold mostly in Europe, the European BEV share is the primary one to look at.

Unfortunately, we don’t have numbers for Renault plug-in hybrids.

Renault ZOE was the second best-selling electric car in Europe in 2021 (by the number of registrations), slightly ahead of the Volkswagen ID.3.

The company reports also 45 Megane-e in 2021, ahead of the market launch in Europe.

Renault’s Dacia brand has noted a fourth consecutive record of 8,477 sales of the Dacia Spring. That’s over 18.6% of its passenger car sales for the month in Europe. In 2021, the company sold 27,876 units.

The JMEV’s Eveasy brand sold in China some 1,007 EVs (4,168 YTD). The company is a joint venture between the Renault Group, Jiangling Motors Corporation Group (JMCG) and China Agricultural Development Construction Fund Corporation. The French manufacturer has held a controlling stake in JMEV since 2019. 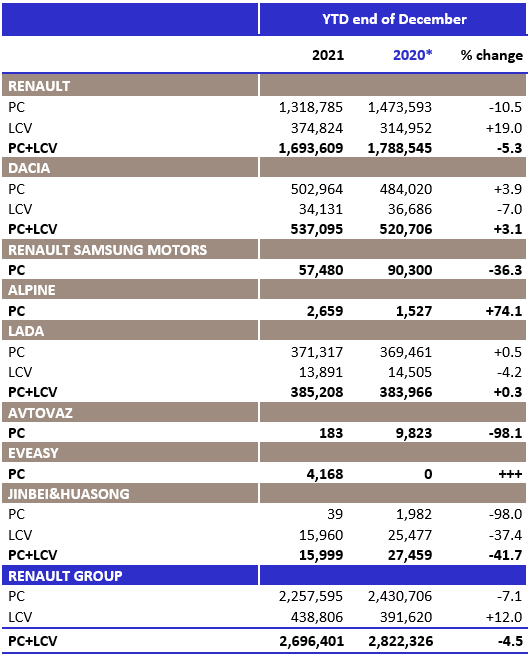