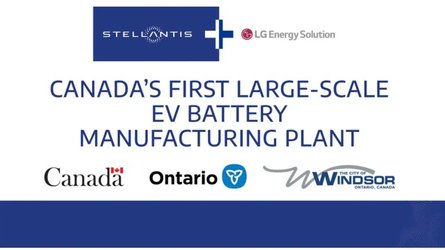 Let’s recall that the investment of over $5 billion CAD ($4.1 billion USD) in a 45+ GWh battery plant was officially announced in March.

It will be Canada’s first large-scale lithium-ion battery production plant, crucial especially for the electrification of the nearby Stellantis’ Windsor Assembly Plant.

According to the press release, the two partners have appointed Danies Lee as chief executive officer (CEO). He previously held a series of global and regional sales and marketing roles for the promotion of lithium-ion batteries at LG Chem.

In a separate announcement, Stellantis revealed that has signed a binding offtake agreement with Controlled Thermal Resources Ltd. (CTR), related to the supply of battery-grade lithium hydroxide for use in Stellantis’ North America electrified vehicle production.

It potentially means that CTR will supply lithium hydroxide from California to NextStar in Canada, as well as to Stellantis’ other battery JV, with Samsung SDI in Indiana.

The contracted volume is up to 25,000 metric tons of lithium hydroxide annually over the 10-year term. It’s an important step to not only gain access to a steady supply of key materials but also make sure that they are locally produced.

“CTR will supply Stellantis with up to 25,000 metric tons per year of lithium hydroxide over the 10-year term of the agreement. Stellantis announced in late 2021 a similar supply deal to support its European vehicle production.”