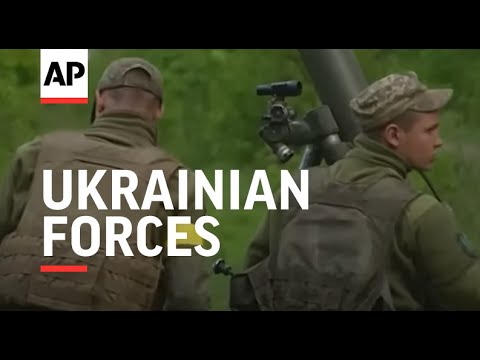 STORYLINE
Ukrainian forces continue to fight against Russian troops in the Kharkiv region, pinning down enemy positions with artillery fire.
The Russian army bombarded Kharkiv, Ukraine’s second largest city, which lies less than 40 kilometres from the Russian border, with heavy artillery for weeks.
After breaking the siege, continued Ukrainian counter-attacks forced Russian troops to retreat toward the border.
Volunteers from around the world joined the fight since the invasion started, following a call by President Volodymyr Zelenskyy.
They are now on the frontlines alongside Ukrainian soldiers.
Chris, a former U.S. Marine who served in Iraq, said he joined the Ukrainians because he did not want to see fellow fighters die as he saw in the deadly battles of Fallujah and Ramadi, and wanted to help Ukraine to stop the invasion.
“I’m here to help and see how we can change the tide of this war one volunteer at a time,” he told AP.
A Ukrainian commander of one of the units of the International Legion who spoke on condition of anonymity for security reasons, told the Associated Press the soldiers in his unit come from all over the world, from countries as far as Japan, Australia and Latin America.
The majority come from United States and United Kingdom.
The commander would not say how many joined from abroad, but he said they are in the thousands and are contributing to the successes of the Ukraine army.
He said all the volunteers in the Foreign Legion have previous combat experience, but they had to adjust to a modern warfare against a regular modern army that uses air power and artillery.
For Iraq’s war veteran Chris, the fight in Ukraine is at the same time similar and different to his previous experience.
“Instead of waiting for IEDs to hit us when we are driving down the road, now the IEDs are flying in the form of missile, artillery, mortar fire, so it’s different but it’s the same,” he said.

#UkraineCrisis #War #soldiers
You can license this story through AP Archive: