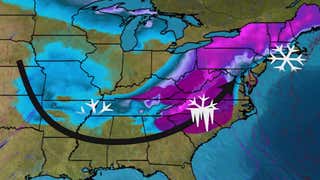 Residents in some areas are being asked to stay home, travel advisories have been issued for dozens of major airports and crews are working to clear and prep roads from Iowa to Georgia to New York as a winter storm is set to bring snow, ice, wind and frigid temperatures across a wide swath of the U.S. over the upcoming holiday weekend.

The storm, named Izzy by The Weather Channel, left roads covered with snow and ice in parts of Iowa and Minnesota Friday as officials in points south and east declared emergencies ahead of the storm.

(FORECAST: Winter Storm Izzy to Spread Mess of Snow, Ice from Midwest into South and East into MLK Weekend)

Here’s a look at the effects of – and planning for – Izzy so far:

State troopers covered 32 crashes with 14 injuries on Friday, including a trooper who was hit. No fatalities were reported.

The governors of Georgia, Virginia, North Carolina and South Carolina all issued emergency declarations on Friday. All advised residents to prepare before the storm moves in.

“This storm will bring significant impacts from snow, sleet and freezing rain in different parts of the state, with likely power outages and travel disruptions,” North Carolina Gov. Roy Cooper said in a news release. “North Carolinians should pay close attention to their local weather forecast over the next few days, and make sure they are personally prepared before Saturday afternoon.”

American, Delta, Southwest, JetBlue and Spirit airlines issued travel advisories and waived change fees at dozens of airports in the path of the storm.

West Virginia in ‘State of Preparedness’

Gov. Jim Justice placed the state on alert to prepare for winter weather. The move signals the state Emergency Operations Center and related agencies to be ready to posture personnel and resources should an emergency develop.

A portion of Interstate 35 was closed at around 12:30 p.m. CST due to a sideways truck blocking both lanes. The road reopened about an hour later. Travelers should check 511 for current road conditions.

Schools Closed in Some Areas Friday

More than 200 plows were on the roads in Iowa Friday morning and operations continued throughout the day and evening, according to the Iowa Department of Transportation’s road conditions map.

Roads were already slick in the early morning and the Iowa State Patrol asked motorists in affected areas to stay home if possible.

Kansas City’s snowplow map showed crews active on streets across the city Friday evening. Some schools in the region closed Thursday and Friday, but that was due to issues related to COVID-19.

Next Up for Izzy: The Southeast

The storm is moving to the East and into the South.

“This will lead to snow for some and ice for others, and for parts of Georgia and the Carolinas, it means rapidly changing conditions from snow to ice and possibly back again,” weather.com meteorologist Jonathan Belles said. “Saturday and Sunday will be nasty for driving in some of these spots, but the last part of the holiday weekend on Monday will give some drier and warmer weather. Be prepared for bad road conditions and the possibility of losing power from north Georgia to the inland Carolinas.”

You can track Izzy with our maps, radar, forecasts, timing and other information here.

Georgia One of Many States Prepping Roads

The Georgia Department of Transportation has more than 50,000 tons of salt and about 46,000 tons of gravel on hand, as well as 407 snow removal dump trucks.

“Winter weather is predicted in North Georgia and metro Atlanta this weekend. GDOT is preparing brine operations, equipment, materials, and staff to respond to the threat,” the agency said in a tweet. “We will continue to monitor conditions as the storm evolves.”

A GDOT official told The Weather Channel Thursday that people in affected areas should stay home and avoid travel.’

Here are five things to know about snow and ice in the South.

Shoppers Face Shortages that Could Get Worse

While shoppers stocked up on the usual bread, milk and other goods, one expert warned that the storm could impact the already stressed U.S. supply chain.

”From an impact perspective, with this kind of weather scenario, all it would take is an accident or two for major Interstate closures to occur,” Francisco Alvarez, lead meteorologist for trucking network Convoy, told weather.com in an email Thursday.

Alvarez cited Midwest highways as a major concern, for example.

“Basically if you could make a box between Omaha, Sioux Falls, Minneapolis/St. Paul, and Des Moines, that will be the most dangerous travel area for truckers,” as Izzy moves through the region, he said.

All drivers need to be aware in areas that the storm will pass through.

Click here for our list of “9 Things to Keep In Your Car If You Must Travel in a Winter Storm.”

And here are some driving safety tips and other winter storm advice issued ahead by the South Carolina Department of Emergency Management ahead of the storm:

-Avoid unnecessary travel in affected areas. If you must travel, make sure your vehicle is in good working condition, your cell phone is charged and extra blankets and snacks are packed in case of delays.

-If you lose power, know how to report the outage to your utility company and have alternate, safe means of staying warm.

-Wrap exposed pipes or take other measures to insulate them from the cold and prevent freezing, which causes pipes to burst.

-If you have a fireplace, have plenty of dry seasoned wood.

-Winter is the most active season for house fires. Keep fire extinguishers on hand, and make sure your family knows how to use them.

-Have a stock of batteries.

-Keep pets and domestic animals in a warm place with access to food and water.

-Check on anyone who may need extra help during winter weather.

The Weather Company’s primary journalistic mission is to report on breaking weather news, the environment and the importance of science to our lives. This story does not necessarily represent the position of our parent company, IBM.